There is still time to get involved and donate!

Food for Thought (FFT), the grassroots campaign created to educate people about FTD, while raising money to help fight this disease, started on September 25 and ends on October 9, 2016.

Here is a link to events accepting online donations.

“The Australian FTD Association invites people to a special black-tie dinner that will never happen!

You won’t have to dress up, leave the comfort of your home or find a babysitter

….. we wanted to apply every dollar raised to achieving our objectives.

THANK YOU for giving us your support and NOT being part of our first fundraising dinner!”

You can visit the Australian FTD Association at www.theaftd.org.au and while you are there, buy some tickets. 🙂

A 2nd new FTD full-page awareness ad appeared today, 10/2/2016, in the main section of the Sunday New York Times, thanks to support from a generous donor.

“Living with FTD is Hard. Living Without Help is Harder.”

Would you like to know about some of the Food for Thought events? Read the stories, help them achieve their goals. Click here to see them.

Food for Thought is a grassroots campaign created to educate people about FTD, while raising money to help fight this disease. This year it is timed to run during World FTD Awareness Week, and one week beyond, from September 25 through October 9, 2016.

Note: To translate the site to English if necessary, using the Chrome browser, right click on the home page and choose translate. I tried with Internet Explorer but it didn’t offer the translate option in all cases.

The inaugural Hope Rising Benefit is the largest event of its kind ever hosted by AFTD, targeting increased awareness of FTD and support needed to accelerate AFTD’s mission. 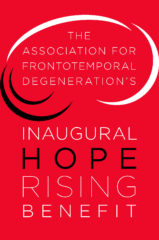 Those gathered on 9/29 will play a vital role in advancing: collaborative research; increased awareness; vital support for those directly impacted; education for healthcare professionals; and advocacy for appropriate, affordable services.

The evening will celebrate one of AFTD’s most generous supporters, David Zaslav, President and CEO of Discovery Communications, who will be honored with the Susan Newhouse & Si Newhouse Award of Hope.

The event takes place at The Pierre Hotel in New York City on Thursday, September 29, 2016. Details.

Here is the World FTD Awareness flyer. You can download it here as a PDF if you wanted to print it and share.

Following up on my post yesterday about the Today Show interview this morning with AFTD volunteer and donor Donald Newhouse and AFTD Medical Advisory Council member Dr. Ted Huey, click here to watch the video. 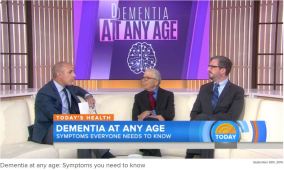 From the NBC Today Show web site – “It’s World FTD Awareness Week, spotlighting frontotemporal dementia, a serious ailment affecting the middle-aged. Don Newhouse, president of Advanced Publications, lost his wife, Suzi, to the disease, and his brother, Si, was recently diagnosed as well. Newhouse shares his story with TODAY’s Matt Lauer, and psychiatrist and neurologist Dr. Ted Huey explains that while Alzheimer’s disease affects the elderly, FTD typically manifests between ages 55 and 65. Learn the four main symptoms you should look out for.”

Their appearance will bring FTD awareness to millions of viewers!

Donald Newhouse is President of Advance Publications, Inc. a holding company whose media properties include newspapers, Conde Nast Publications, Vogue, Vanity Fair, GQ, Architectural Digest and other magazines. His wife and brother were diagnosed with FTD. Last year at the World FTD Awareness event at the Freedom Tower, he announced a $5.75 million gift from the Samuel I. Newhouse Foundation, to The Association for Frontotemporal Degeneration (AFTD) for a multi-year FTD Biomarkers Initiative.